And they came down and went forth upon the face of the earth; and the first came and stood before my father, and gave unto him a book, and bade him that he should read. 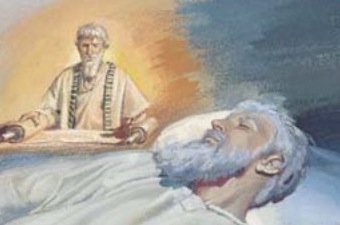 Ezekial also had a vision where he was handed a book.

9 ¶And when I looked, behold, an hand was sent unto me; and, lo, a roll of a book was therein;
10 And he spread it before me; and it was written within and without: and there was written therein lamentations, and mourning, and woe. [1]Ezek. 2:9–10

In the revelation experienced by John the Beloved, John was given a book and told to eat it, probably symbolically suggesting the idea, “Devour the contents of this book. Make it part of you.”

And I went unto the angel, and said unto him, Give me the little book. And he said unto me, Take it, and eat it up; and it shall make thy belly bitter, but it shall be in thy mouth sweet as honey.

And I took the little book out of the angel’s hand, and ate it up; and it was in my mouth sweet as honey: and as soon as I had eaten it, my belly was bitter.

And he said unto me, Thou must prophesy again before many peoples, and nations, and tongues, and kings. [2]Revelation 10:9-11

Also in John’s vision, the very book of life was opened, and mankind as individuals were judged from the both the book of life and other books of scripture:

12 And I saw the dead, small and great, stand before God; and the books were opened: and another book was opened, which is the of life: and the dead were judged out of those things which were written in the books, according to their works. [3]Revelation 20:12

By this time, Lehi had learned to take such dreams very seriously. Plus, being able to clearly read words is an additional proof that this is a vision, and not just a dream. In a dream, reading anything is terribly difficult, if at all possible. Reading these words had a profound effect on Lehi. They filled him with the Spirit and caused his heart to both mourn for Jerusalem and rejoice in the goodness of the Lord.