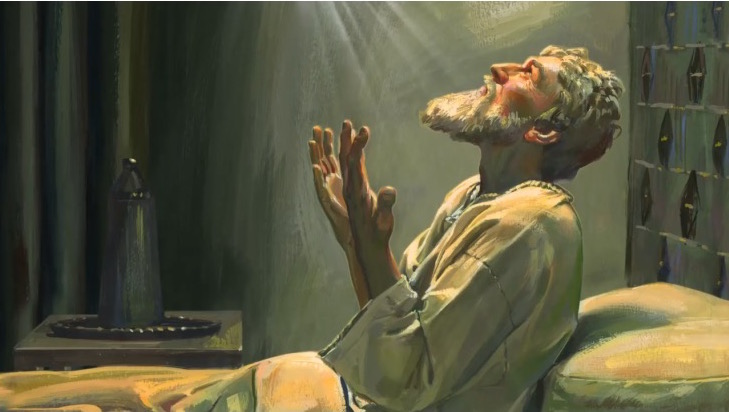 And it came to pass that when my father had read and seen many great and marvelous things, he did exclaim many things unto the Lord; such as: Great and marvelous are thy works, O Lord God Almighty! Thy throne is high in the heavens, and thy power, and goodness, and mercy are over all the inhabitants of the earth; and, because thou art merciful, thou wilt not suffer those who come unto thee that they shall perish!

Often the visions given by the Lord come in a form that will be most impactful to the recipient. In this case, that included a good deal of reading. Lehi was likely a studious man, so reading from a book in the vision would have been deeply moving to him. And being filled with the spirit, as well as the revealed words of the book, “he did exclaim many things unto the Lord.”

Great and marvelous are thy works, O Lord God Almighty!

This particular line is an almost direct quote from the “song of Moses” mentioned in Revelation 15:3, which says, “And they sing the song of Moses the servant of God, and the song of the Lamb, saying, Great and marvellous are thy works, Lord God Almighty; just and true are thy ways, thou King of saints.” That suggests to me that the plates of brass contained a song recorded either by or for Moses with which the saints in John the Beloved’s time were probably familiar. It also suggests to me that Lehi was well versed in the scriptures of his time.

It also suggests to me that Lehi’s experience was so overwhelming that his own words must have seemed woefully inadequate, so he resorted to beginning his praise with some known and beautiful words of scripture.

Thy power, and goodness, and mercy are over all the inhabitants of the earth

I find this phrase interesting. Lehi lists three essential attributes of the Lord that are common and available to all mankind. First, His power. He is all powerful. He can essentially do anything. His goodness. God is goodness. He’s the perfect balance of kindness and justice. He is both loving perfection and perfect love. Last of all, mercy. He, referring to Jehovah, the anointed one, to take upon Him the sins of all mankind, knows and has suffered all our sins, pains, and weaknesses. He above all mankind has the capacity for mercy, and bestows it abundantly. That atoning sacrifice knows no bounds, and extends across every person to ever to enter mortality, and far beyond it into worlds unknown to the rest of us. I think Lehi chose those words well.

This passage is also characteristic of the kinds of changes that have taken place between the first edition of the Book of Mormon and the modern version. This verse is slightly different in the original, as it reads, “and thy power, and goodness, and mercy is over all the inhabitants of the earth.”

See the difference? Is instead of are. A slight grammatical change. Actually, either way can be considered (I suspect) grammatically correct for the time, but in modern language, the use of are is considered more proper. Either way, the essence, the message, and most of the wording is identical. The changes between the original Book of Mormon and the modern edition are truly negligible.

thou wilt not suffer those who come unto thee that they shall perish!

While it’s true that coming unto Christ doesn’t guarantee that life’s suffering is over, it’s rather remarkable how often the righteous are spared from perishing. Some have asked the question, “Why is it that some people seem to get an answer to their prayers, and others don’t?” But God is no respecter of persons. He hears every prayer from each of His children. All who make sincere effort will find that some of their prayers receive clear and unmistakable answers. A better question might be, “Why doesn’t every prayer by every person receive an obvious, immediate answer?” And that question is a little easier to answer. We aren’t here on earth to flow through life without trials, challenges, or pain. We’re meant to struggle, learn, grow, and progress. If we were given immediate answers to all prayers, it would overrule agency and prevent us from being able to develop true faith.

When you consider Abinadi, Stephen, and even Joseph Smith, you see that the Lord doesn’t always spare the righteous from death. Such might be a tragedy if this were the end of life. But it’s not. Not only will we one day be resurrected, but the spirit of man lives on, and no one is ever really “lost” for even a moment. And the righteous who die in Christ have only joy, love, and glory to look forward to.

The point in all of this is that those who are righteous, who choose to follow the word of God, have nothing at all to fear–ever. God is more directly involved in our lives than we realize, but also loves and respects our agency. His direction is always right, and His mercy genuinely is over all the earth, over every person who will accept the offering.