For it came to pass in the commencement of the first year of the reign of Zedekiah, king of Judah, (my father, Lehi, having dwelt at Jerusalem in all his days); and in that same year there came many prophets, prophesying unto the people that they must repent, or the great city Jerusalem must be destroyed.

Up to this point, the verses have mostly been giving introduction. But now Nephi starts giving us the context of his situation–his backstory, if you will.

In the commencement of the first year of the reign of Zedekiah, king of Judah

From the way he wrote this, Nephi seems to recognize that we, the readers, would be familiar with Zedekiah, and we do have an account of Zedekiah’s reign. Though Nephi wasn’t around to see much more than the beginning of Zedekiah’s reign, we know from the Bible what happened to Zedekiah. Zedekiah began his rule at age 21 in about the year 597 BC (600 BC by the Nephite calendar)[1]Since we know our modern calendar to have a few year’s discrepancy, we can trust the Nephite calendar better. James E. Talmage said: “According to the commonly accepted reckoning, Zedekiah … Continue reading

This was a time of heavy political and social turmoil. The eventual overthrow of Jerusalem wasn’t an isolated incident. It was more like the worst blow in a series of attacks that had been taking place for several years. Wikipedia gives us the following timeline:

627 BC: The death of Ashurbanipal and the successful revolt of Nabopolassar replaces the Neo-Assyrian Empire with the Neo-Babylonian Empire
609 BC: Jerusalem becomes part of the Empire of the Twenty-sixth dynasty of Egypt after Josiah of Judah is killed by the army of Pharaoh Necho II at the Battle of Megiddo. Josiah’s son Jehoahaz of Judah is deposed by the Egyptians and replaced as ruler of Jerusalem by his brother Jehoiakim.
605 BC: Jerusalem switches its tributary allegiance back to the Neo-Babylonians after Necho II is defeated by Nebuchadnezzar II at the Battle of Carchemish.
599–597 BC: first Babylonian siege – Nebuchadnezzar II crushed a rebellion in the Kingdom of Judah and other cities in the Levant which had been sparked by the Neo-Babylonians failed invasion of Egypt in 601. Jehoiachin of Jerusalem deported to Babylon (Biblical sources only)
587–6 BC: second Babylonian siege – Nebuchadnezzar II fought Pharaoh Apries’s attempt to invade Judah. Jerusalem mostly destroyed including the First Temple, and the city’s prominent citizens exiled to Babylon (see Nebuchadnezzar Chronicle)
582 BC: Gedaliah the Babylonian governor of Judah assassinated, provoking refugees to Egypt and a third deportation

In a sense, Zedekiah was Judah’s last chance to prove that Jerusalem could handle governing itself. Nebuchadnezzar was watching Jerusalem close, ready to strike if it rebelled against him. Even more important, the Lord was giving His people one last chance to prove that they were willing to obey His laws and heed the counsel of His prophets. The king and the people had become so rebellious against the Lord that even when God counseled them to avoid an alliance with Egypt and side with Babylon (with whom Jerusalem already had an alliance, and had been paying tribute), they wouldn’t listen. Even the priests of Israel had adopted many of the wicked practices of the surrounding nations and defiled the Lord’s temple. When it came down to it, the children of Israel had lost sufficient faith in the Lord to follow His counsel, and even despised the prophets He sent.

11 ¶Zedekiah was one and twenty years old when he began to reign, and reigned eleven years in Jerusalem.

12 And he did that which was evil in the sight of the Lord his God, and humbled not himself before Jeremiah the prophet speaking from the mouth of the Lord.

13 And he also rebelled against king Nebuchadnezzar, who had made him swear by God: but he stiffened his neck, and hardened his heart from turning unto the Lord God of Israel.

14 ¶Moreover all the chief of the priests, and the people, transgressed very much after all the abominations of the heathen; and polluted the house of the Lord which he had hallowed in Jerusalem.

15 And the Lord God of their fathers sent to them by his messengers, rising up betimes, and sending; because he had compassion on his people, and on his dwelling place:

16 But they mocked the messengers of God, and despised his words, and misused his prophets, until the wrath of the Lord arose against his people, till there was no remedy.

17 Therefore he brought upon them the king of the Chaldees, who slew their young men with the sword in the house of their sanctuary, and had no compassion upon young man or maiden, old man, or him that stooped for age: he gave them all into his hand.

Zedekiah’s fall marked the end of the rule of Judah, meaning that once he was taken, the Jews would not govern Jerusalem again until modern times.

Who were the other prophets that testified against Jerusalem?

The fact that the bible doesn’t mention Lehi suggests that there were probably several prophets now unknown to history that testified against Jerusalem, but the bible does mention a few. Some were before Lehi’s time, others after (those who called either the remaining survivors, or those taken away to Babylon, to repentance), but only a couple were known to be operating in full ministry when Lehi received his prophetic call.

Jeremiah, serving from about 627-580 BC [2]Jeremiah 49:34 ¶The word of the Lord that came to Jeremiah the prophet against Elam in the beginning of the reign of Zedekiah king of Judah, saying, 35 Thus saith the Lord of hosts; Behold, I will … Continue reading and Daniel [3]Daniel’s ministry seems to begin at the time of his being carried away into Babylon. A great deal of Daniel’s prophecies deal with the last days, and the coming forth of the gospel when … Continue reading

Prophet’s just prior to Lehi’s time, some of whom may have known Lehi, included Joel (about 620 BC), Habakkuk (about 630 BC), Zephaniah (630 BC), and Nahum (640 BC). Their Old Testament books reflect much of the concern that the prophet’s held for Israel, and the pending destruction of Jerusalem. There were several other prophets earlier than this that also warned the people to return to the Lord, or Israel would be scattered over the face of the earth, such as Isaiah (745-685 BC), Micah (740-700 BC), and Amos (767-753).

There are many biblical chapters about this time period that may be worth studying.[4]2 Kings 24, 2 Chronicles 36, Jeremiah 37, Jeremiah 44

Lehi, having dwelt at Jerusalem in all his days 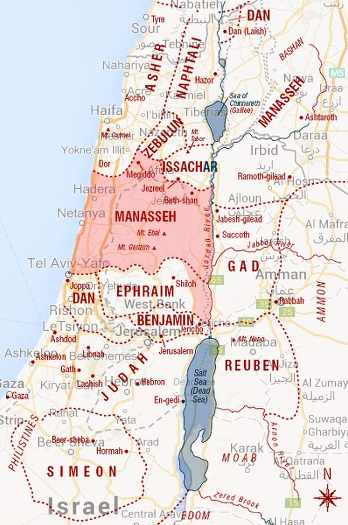 Inheritance of Manasseh, superimposed over a modern map.

Most likely, Lehi didn’t live right in the middle of the city of Jerusalem. Nephi’s record was written 30+ years after leaving his home in the middle east. Likely, everything in that region of the world would be referred to as Jerusalem, much as a person visiting another country might refer to the cities of West Valley, Sandy, and West Jordon as Salt Lake City. Though we don’t know for certain his home town, we do know that the tribe of Manasseh (from which Lehi was born) inherited the land north of Jerusalem. It’s possible Lehi’s inheritance was in that area.

35 Thus saith the Lord of hosts; Behold, I will break the bow of Elam, the chief of their might.

36 And upon Elam will I bring the four winds from the four quarters of heaven, and will scatter them toward all those winds; and there shall be no nation whither the outcasts of Elam shall not come.

37 For I will cause Elam to be dismayed before their enemies, and before them that seek their life: and I will bring evil upon them, even my fierce anger, saith the Lord; and I will send the sword after them, till I have consumed them:

38 And I will set my throne in Elam, and will destroy from thence the king and the princes, saith the Lord.

5 And they will deceive every one his neighbour, and will not speak the truth: they have taught their tongue to speak lies, and weary themselves to commit iniquity.

6 Thine habitation is in the midst of deceit; through deceit they refuse to know me, saith the Lord.

7 Therefore thus saith the Lord of hosts, Behold, I will melt them, and try them; for how shall I do for the daughter of my people?

8 Their tongue is as an arrow shot out; it speaketh deceit: one speaketh peaceably to his neighbour with his mouth, but in heart he layeth his wait.

9 ¶Shall I not visit them for these things? saith the Lord: shall not my soul be avenged on such a nation as this?

10 For the mountains will I take up a weeping and wailing, and for the habitations of the wilderness a lamentation, because they are burned up, so that none can pass through them; neither can men hear the voice of the cattle; both the fowl of the heavens and the beast are fled; they are gone.

11 And I will make Jerusalem heaps, and a den of dragons; and I will make the cities of Judah desolate, without an inhabitant. ↑3 Daniel’s ministry seems to begin at the time of his being carried away into Babylon. A great deal of Daniel’s prophecies deal with the last days, and the coming forth of the gospel when God’s kingdom would fill the earth. ↑4 2 Kings 24, 2 Chronicles 36, Jeremiah 37, Jeremiah 44

One thought on “Verse by Verse Commentary: 1 Nephi 1:4”