Why Did the Jews Hail Jesus as King, and Within a Week Have Him Crucified? 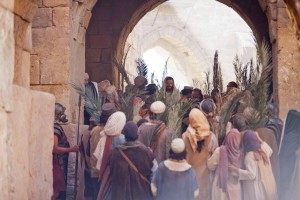 Palm Sunday celebrates the Sunday Jesus rode a donkey into Jerusalem (as would a king), the people shouted praises of Hosannah, hailing Jesus as their king, and the Messiah. So how could the Jews, who genuinely accepted him as their prophet, and the Messiah who would save all the house of Israel, have Him crucified within five days?

My understanding is that the Jews in general honored, reverenced, and hailed Jesus as the Messiah, but many of the Jewish leaders (such as the leaders of the Sadducees and Pharisees) were extremely jealous and offended by His influence.

When those leaders met in secret, abducted him in secret, and tried him in secret, it was done against the law and without the knowledge of the people. By the time they successfully “convinced” Rome that Jesus was a threat to Caesar, and thus worthy of execution, the people could do nothing.

The public execution acted as a warning to all who hailed Jesus, to convince them that they might suffer the same fate if they joined His following. When we say he was rejected by the jews, it was not the general population that condemned him, but the powerful leaders who feared losing their positions, prominence, and power–not to mention that they were deeply offended that Jesus often condemned their motives and practices.

I picture the news of Jesus’ execution as being one of the greatest blows to the hopes of the population, who believed Jesus would free them from Roman bondage, heal them, and continue to bless them, lead them, and teach them the true and living word of God. The fear and desperation that followed his crucifixion must have been downright devastating to those who had only a week earlier celebrated his arrival into the Holy city.